Tensions in Italy’s overcrowded prisons erupted Monday over new coronavirus containment measures, with riots in at least two dozen lock-ups and the deaths of six inmates who broke into an infirmary and overdosed on methadone.

Tensions in Italy’s overcrowded prisons erupted Monday over new coronavirus containment measures, with riots in at least two dozen lock-ups and the deaths of six inmates who broke into an infirmary and overdosed on methadone.

Italy’s national prisoner rights advocate urged wardens to take immediate measures to calm the situation and mitigate the new regulations, which include a suspension of family visits as a way to prevent transmission of the virus.

The difficulty of accepting extreme measures is accentuated in places where people don’t have any freedom,” the advocate said in a statement, urging wardens to provide inmates with greater access to information and phone calls to family members.

The Italian government has issued sweeping measures to try to contain the virus, limiting travel into and out of Lombardy and parts of Veneto, canceling schools nationwide, barring gatherings of people and urging Italians to keep a meter (about three feet) apart. With more than 7,300 infected, Italy has more virus cases than any country outside Asia.

Human rights advocates have warned that fears of the virus were hitting inmates particularly hard, given their awareness that the overcrowded conditions made them vulnerable, said Alessio Scandurra, coordinator of adult detention advocacy at the Antigone Association, which lobbies for prisoner rights. 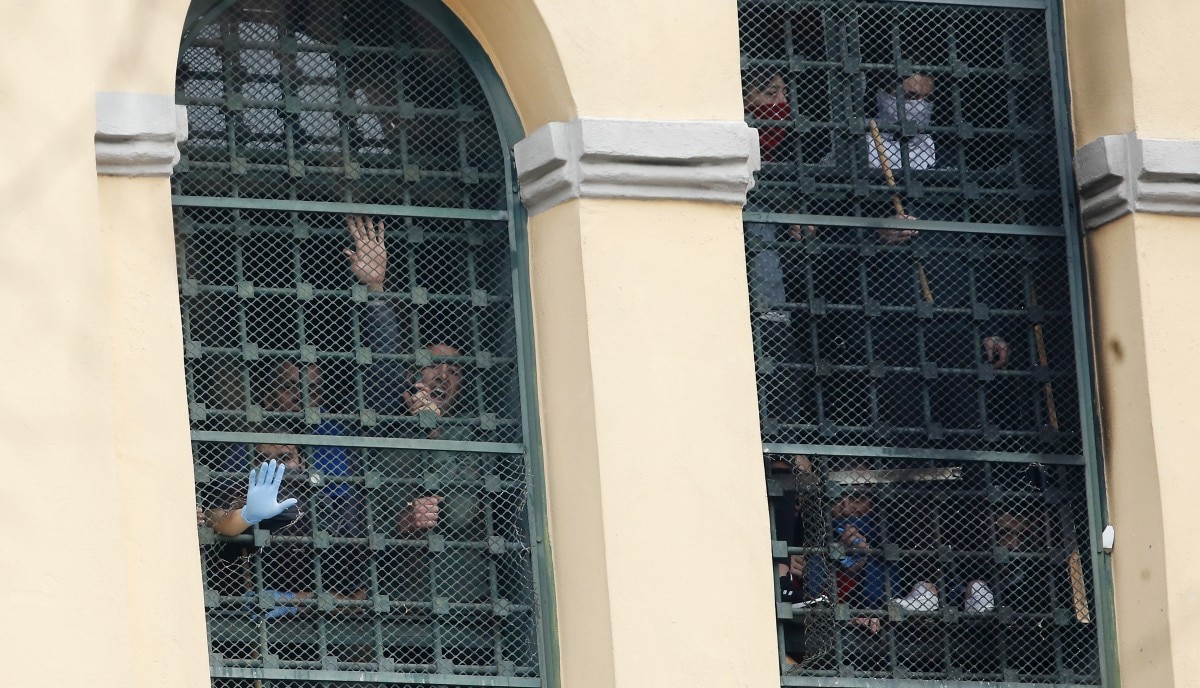 Inmates stand behind bars at the San Vittore prison as protests broke out following restrictions that were imposed on family visits to prevent coronavirus transmissions, in Milan, Italy, on Monday. (AP)

In prisons in general, there’s a lot of anxiety,” he said in a telephone interview. You can’t leave, and you’re in a place where infectious diseases can spread critically. Obviously inmates know this very well.”

When prison administrators suspended family visits, the tensions exploded probably as a panic reaction to limited accurate information about the measures and the virus’ spread, he said.

In one of the biggest riots Sunday, prisoners in Modena set mattresses on fire. Six inmates died after they broke into the prison infirmary and overdosed on methadone, which is used to treat opiod dependence, said Donato Capece, secretary general of the penitentiary police union.

On Monday, inmates climbed onto the roof of the San Vittore prison in Milan and held up a painted sheet reading Indulto, Italian for pardon.

Capece accused the government of abandoning the prison system, refusing to provide sufficient measures to prevent the spread of the virus and leaving guards on their own to deal with anxious, irate prisoners.

The administration is completely absent, he told The Associated Press. They have left the penitentiary police in jeopardy.

He confirmed that protests had taken place in more than two dozen prisons, including in Foggia where some prisoners had escaped. Video posted by Foggia Today online showed prisoners climbing the fence with riot police trying to keep them at bay.

The European Court of Human Rights has fined Italy over its poor prison conditions. Antigone’s Scandurra said as of the end of February, Italy had a prison capacity of 50,931 and a prison population of 61,230. Some prisons are at 180% capacity, while nationwide the average is 120% capacity, he said.

Adding to the anxieties among prisoners is uncertainty about the progress of their cases as Italy’s overburdened court system has ground to a near halt because of virus containment measures. Even though cases where defendants were jailed were exempted from postponed hearings, prisoners probably assume they too will endure even longer delays in the justice system, Scandurra said.

The world is in the midst of a’very hazardous’ COVID-19 pandemic, according to WHO, as the Delta form continues to develop and mutate.