New Delhi: Amidst the ongoing Centre-Twitter face-off, the Congress has written to the Delhi police that its recent raids on the latter’s offices were illegal and politically driven to “give cover fire” to top BJP leaders who have been accused of sharing the alleged fake “toolkit”.

In a letter to the commissioner of Delhi police, the head of the Congress research team Rajeev Gowda, the chief of the party’s social media team Rohan Gupta, and the party’s advocate Amar Panwar said despite the party’s complaint against BJP leaders who circulated a fake “Congress toolkit” on social media on May 18, police officials hadn’t filed a first information report (FIR). It also said that since the Chhattisgarh police, which filed the first FIR in the matter on May 19, is currently investigating the case, the Delhi police doesn’t have any jurisdiction whatsoever to probe the issue any further.

The letter comes on the heels of Delhi police’s recent raids on Twitter, even as it attempts to deflate its claim that the action against Twitter was part of a “preliminary enquiry” based on the May 18 complaint by the Congress. Attacking Twitter, which equated the raids to “intimidation tactics” ever since it added a “manipulated media” tag to tweets by senior BJP leaders, the Delhi police defended itself in a press statement on Thursday.

“…since Twitter Inc. claims to have material information basis which it not only ‘investigated’ but arrived at a ‘conclusion’, it must share that information with the Police. There should not be any confusion about this logical course.The entire conduct by Twitter Inc, including its Indian entity, in the last few days has been obfuscatory, diversionary and tendentious. There is one simple thing to do which Twitter refuses to do. That is, cooperate with the law enforcement and reveal to the legal authority the information it has,” the Delhi police said, adding that it was only acting upon the “preliminary enquiry” initiated at the behest of the Congress’s complaint, and not the Union government. 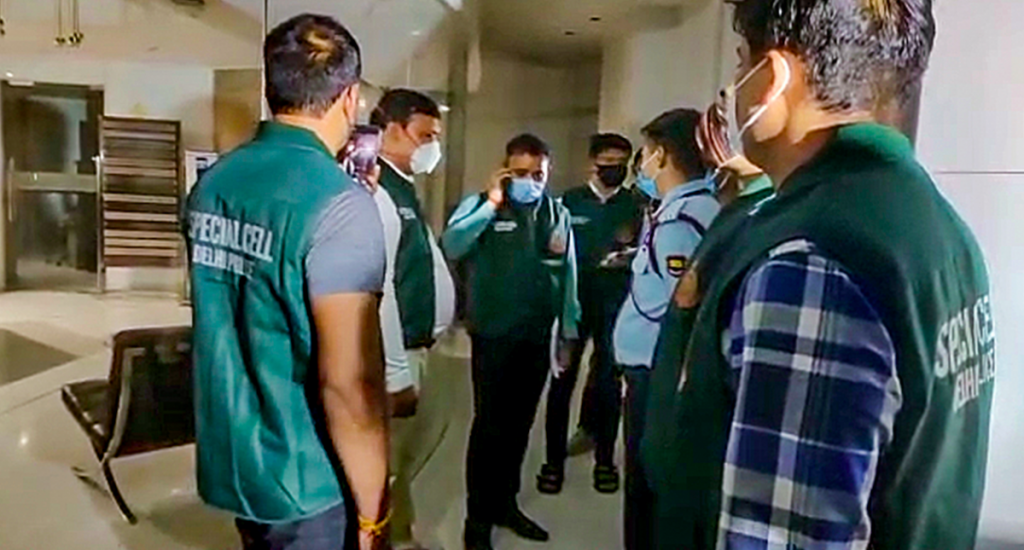 A team of Delhi Police’s Special Cell visits the Twitter India’s Lado Sarai office in connection with the probe into the alleged ”COVID toolkit” matter, in New Delhi, Monday, May 24, 2021. Photo: PTI

However, many in the Congress wondered what prevented the Delhi police from filing an FIR and question the BJP leaders as the first line of action, instead of raiding the offices of Twitter.

Against this backdrop, the Congress leaders, in the letter to the Delhi police, indicated that since no FIR has been filed by the Delhi police yet despite multiple requests, the raids on Twitter only sought to dislodge the probe being conducted by Chhattisgarh police, which has filed the first FIR in the matter.

“…no FIR was registered in the said case by Delhi Police – acting clearly under pressure and the behest of the Union Home Ministry in order to give cover fire to BJP Leaders and Union Ministers guilty of committing a serious crime,” the letter stated.

It also added that the Congress had already requested to withdraw the complaint made to Delhi police after it failed to register an FIR despite multiple requests. “Accordingly, vide letter dated 22.05.2021, submitted to you, through our lawyer Shri Aman Panwar, we had withdrawn with a further request to transfer the said complaint dated 18.05.2021 from your jurisdiction and informed you that given your inaction against the accused BJP leaders and Union Ministers, we have already approached the Chhattisgarh Police on 19.05.2021, to join as co-complainants in FIR No. 215 of 2021 registered at P.S. Civil Lines, Raipur,” the signatories said in the letter to the commissioner.

They further said that the Supreme Court in its judgments has set precedents that the first FIR – the one filed by Raipur police in this case – should be seen as primary, and that “there cannot be a second FIR on the same offence.” Advocate Panwar cited  T.T. Antony vs State of Kerala and Arnab Ranjan Goswami vs Union of India & Ors to argue that the Delhi police may be overstepping.

“In view of the above law laid down by the Hon’ble Supreme Court, it is clear that once the Chhattisgarh Police has already registered an FIR on the same set of facts, the Delhi Police has no jurisdiction to investigate the said matter any further. The alleged Preliminary Inquiry being conducted by the Delhi Police is nothing but a clear cut case of malafide and misuse of state machinery and resources, being done at behest and under pressure from the BJP and Modi Government…,” the letter said.

On May 18, the Congress had written to the Delhi police to take immediate action against BJP leaders like Sambit Patra, Raman Singh, J.P. Nadda, and a host of Union ministers for “attempting to stoke civil unrest, communal disharmony, and violence” against the Congress. No FIR has been registered in the matter until now.

From left to right: Union minister for urban development Hardeep Singh Puri, BJP president J.P. Nadda, BJP spokesperson Sambit Patra, Union minister Smriti Irani. All of these senior BJP leaders were among those who shared a purported Congress document that the party says is a forgery, a claim Twitter appeared to endorse by adding a health warning to Patra’s tweet.

Based on a complaint around the same time by Akash Sharma, president of the Chhattisgarh chapter of the Congress’s student’s wing, the National Students Union of India (NSUI), the Raipur police filed an FIR and began its investigation, and subsequently added the first complainants, Gowda and Gupta, as co-complainants upon their request.

The Delhi police swung into action after the Raipur police on May 22 requested the Delhi police to “hand over the relevant material” of the matter so that it could pursue the case. The Raipur police had also summoned Patra for questioning but the BJP spokesperson cited “relief work” to express his inability to appear before it.

Telangana’s government claims that the Centre must make a decision on Krishna River water sharing.