Last week, RBI Governor Shaktikanta Das announced the latest monetary policy review. The broad takeaway: The RBI marked down India’s GDP growth forecast for the current financial year 10.5% to 9.5% and marked up the inflation forecast for the year from 5% to 5.1%.

Typically, faltering growth prompts the RBI to cut interest rates in order to spur economic activity. But rising inflation requires raising interest rates. And since RBI is mandated by law to target inflation within the band of 2% and 6%, the best it could do — and it has been doing this for several months now — is to maintain the status quo on interest rates.

To be sure, under normal circumstances these two variables — GDP growth rate and inflation rate — are expected to move in the same direction. In other words, when GDP growth picks up, it is more likely that inflation also picks up. That’s because higher growth typically means more demand from people and more demand typically results in prices of those goods and services going up. Similarly, when GDP growth falters, it is more likely that inflation also falls.

But for most of his tenure as the RBI Governor, Das has found that the GDP growth rate has faltered while inflation has spiked.

Epictetus famously believed that there weren’t a lot of things under human control and that is why he advised that humans should instead control how they reacted to what was beyond their control. Given the nature of the Covid-19 pandemic and how it is impacting the economy, such stoic wisdom is indeed useful.

But Epictetus’ very next sentence, which remains hidden by the ellipsis above, is also quite instructive: “Skilful pilots gain their reputation from storms and tempests”. In fact, Epictetus said a lot of things that are relevant to India today. Such as: “All religions must be tolerated… for every man must get to heaven in his own way” or “A ship should not ride on a single anchor, nor life on a single hope”.

So what made Governor Das lean on the Stoics?

Perhaps it has to do with the results of the latest RBI Consumer Confidence Survey which was conducted in May. The RBI conducts this survey every couple of months by asking households in 13 major cities — such as Ahmedabad, Bhopal, Guwahati, Patna and Thiruvananthapuram — about their current perceptions and future expectations on a wide variety of economic variables. These variables include general economic situation, employment scenario, overall price situation, own income and spending levels.

Based on these specific responses, the RBI constructs two indices. One, the Current Situation Index (CSI) and two, Future Expectations Index (FEI). The CSI maps how people view their current situation (on income, employment etc.) vis a vis a year ago. The FEI maps how people expect the situation to be (on the same variables) a year from now.

By looking at the two variables as well as their past performance, one can learn a lot about how Indians have seen themselves fairing over the years.

As CHART 1 shows, CSI has fallen to an all-time low of 48.5 in May. An index value of 100 is crucial here as it distinguishes between positive and negative sentiment. At 48.5, the current consumer sentiment is more than 50 points adrift from being neutral. In other words, more than 50% of the respondents felt that they are worse off at present in comparison to a year ago. It is important to note that a year ago, the CSI had hit an all-time low.

The future expectations index (FEI) also moved to the pessimistic territory for the second time since the onset of the pandemic.

To further see these falls in perspective, I have highlighted the two events — demonetisation (blue arrow) and Prime Minister Modi’s reelection in 2019 (green arrow) — since they coincide with the peaks of positive consumer sentiment.

But to gain a better understanding of which specific factors are pulling down these indices, we need to look at the following charts.

The RBI says that the Current Situation Index is being pulled down because of two factors in particular. These are the consumer sentiments on the general economic situation and the employment scenario. 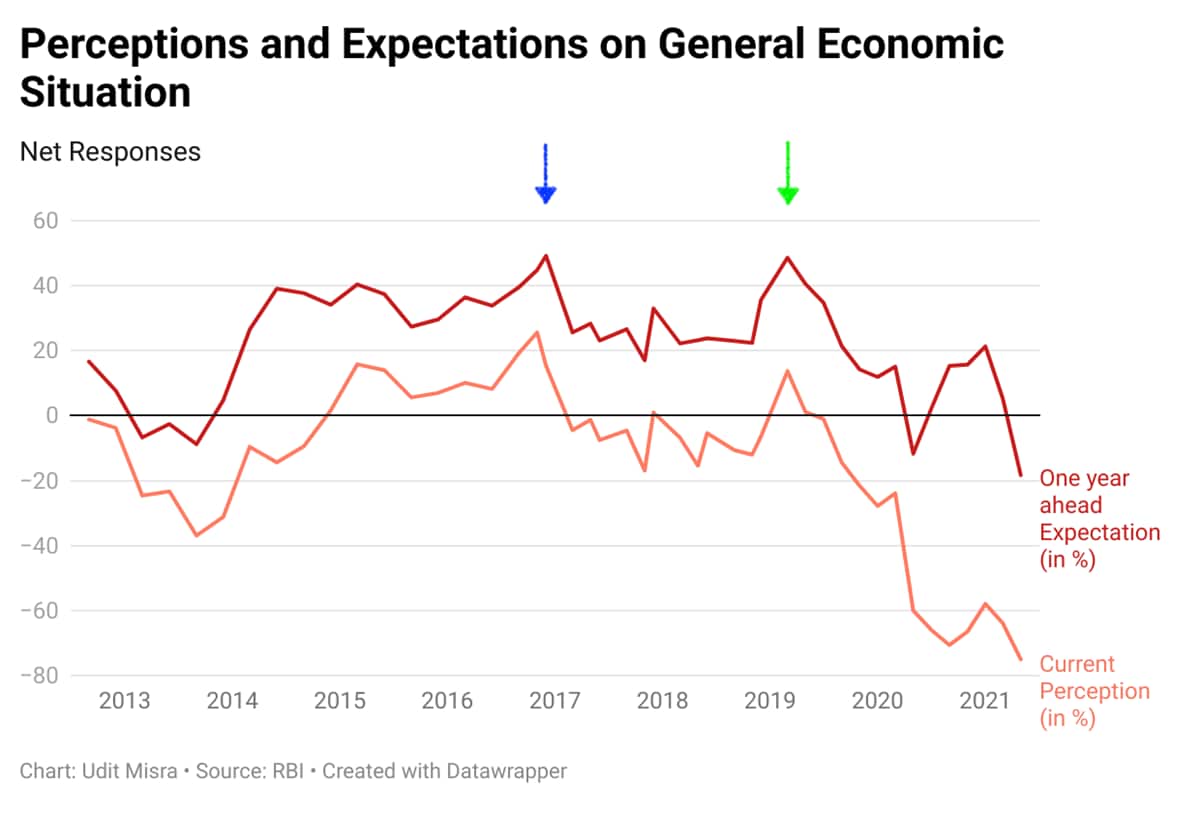 Similarly, net responses are calculated for “one year ahead expectations” and a negative net response implies more people expect things to get worse in a year.

It is noteworthy that there has been a largely secular decline in both current consumer sentiment and future expectations since PM Modi’s reelection in 2019 (green arrow).

The last such trough — albeit not as deep — on the general economic situation was in 2013-14, which was the last year of UPA rule.

The other big factor that is bringing down consumer sentiment is the worsening employment prospects in the country. 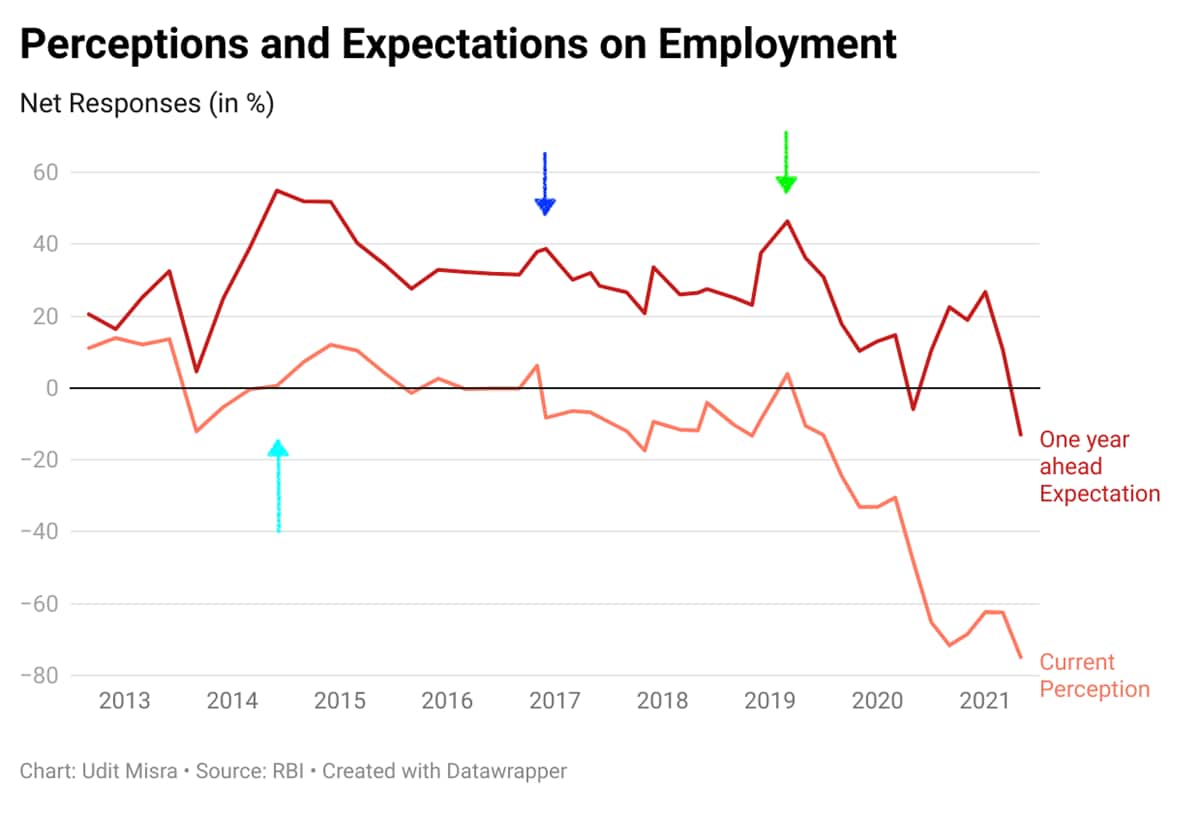 CHART 3-perceptions and expectations on employment.

On employment, the current sentiment has been worsening ever since PM Modi was elected in 2014 (sky blue arrow). There were only two spikes, which again coincide with Demonetisation and PM Modi’s reelection in 2019.

Beyond the medium-term trend, what also stands out is the starkness of consumer sentiments on employment. The difference between the percentage of respondents who think the employment situation has improved (7.2%) and those who think it has worsened (82.1%) from a year ago is a whopping 75%. What is equally worse is that more people expect the employment situation to worsen a year from now — that is why the one year ahead expectation line is below 0.

The rather depressing employment outlook was crucial not just in pulling down the current situation index (CSI) but also the future expectation index (FEI). But there was one more factor that is bringing down the FEI: the outlook on incomes.

CHART 4 maps the net responses for current perception and future expectation on their income. Again, much like employment, the prospects on incomes have registered a secular decline since roughly the start of PM Modi’s tenure in 2014. The two positive spikes again coincide with Demonetisation and the 2019 Lok Sabha elections. CHART 4: Perceptions and expectations on income.

The current perception line has plummeted since the pandemic and shows that more and more respondents believe that their current income is worse than what it was a year ago.

Thankfully the future expectations line has not yet dipped below the zero mark. This means that in percentage terms more people expect to earn higher in a year’s time. Whether that will happen or not, however, is an entirely different matter.

Typically the gap between the line mapping current perceptions and the line mapping future expectations — with the latter being higher than the former — shows that people live in hope and expect things to get better a year from when they were surveyed. In the case of incomes, this gap has increased quite dramatically since the start of the pandemic, showing possibly the strength of hope.

When looking at any of these charts, it is also important to note that while one-year ahead expectations are mostly in the positive territory — implying more people hope they will be better off in a year’s time — when one goes forward a year and looks at the “current perception” a year later, it often is in the negative territory — implying more people believe they are worse off than a year ago.

There are two more charts that merit your attention.

CHART 5 maps the net responses on the inflation rate (or the rate at which prices increase year on year). This is quite a remarkable chart because it is unlike any other in one crucial respect. Both the lines are in the negative territory and that too deeply negative. 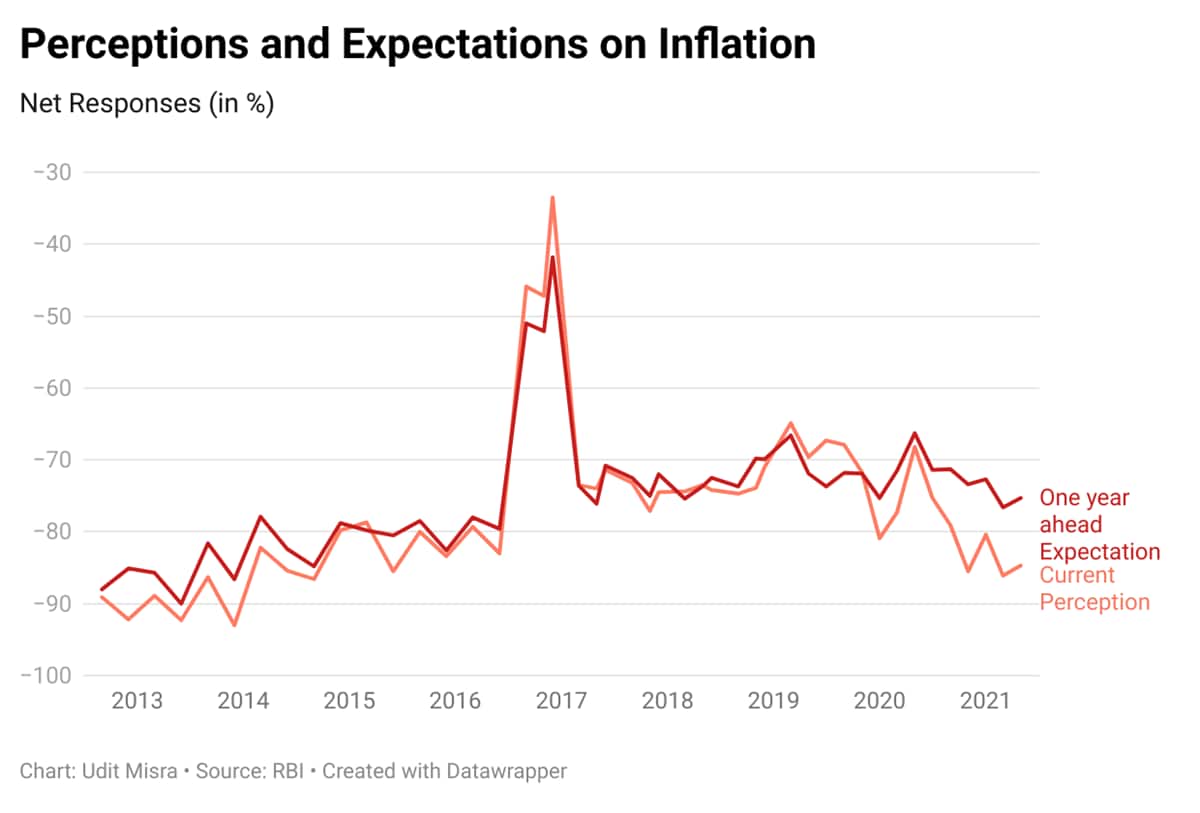 CHART 5: Perceptions and expectations on inflation.

Such hardened inflation expectations might explain why, in the past, the RBI has found it difficult to bring down interest rates as often as or by as much as the government wanted.

Lastly, CHART 6 provides a clue as to why even the businesses are so bothered about the fall in consumer demand in India and are asking the government to even print money to boost aggregate demand in the economy. These charts lay out the tricky challenge facing the Indian economy.

Not just Akshay Kumar and Hrithik Roshan, here are other Bollywood celebs who are neighbours - Times Now

Pak economy in bad shape no more a revelation due to poor performance in public sector: Report – Times Now