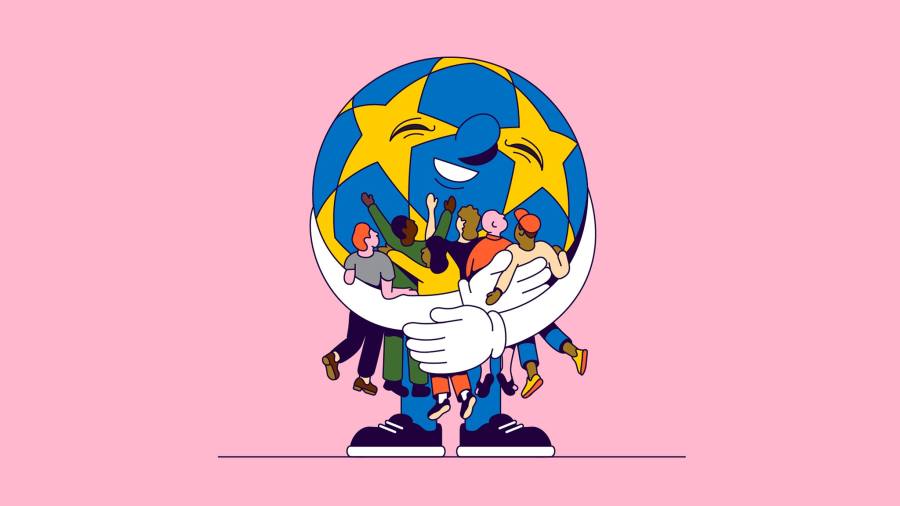 When the Euro 2020 championship finally kicks off on June 11, European politicians and policymakers should be taking notes. This tournament showcases an ideal of Europe — how it could be.

The European championship stems from the most fertile period of continental integration. On June 1 1955, six men representing six European countries gathered around a table in Messina, Sicily, for talks that ended up creating the European Economic Community, ancestor of the EU. Three months later, Sporting Lisbon played Partizan Belgrade in the first match of football’s European Cup, ancestor of today’s Champions League. And in June 1958 in Stockholm, the continent’s football associations agreed to start a European Nations’ Cup, the ancestor of Euro 2020.

The pan-European football formats have outlasted regional tournaments such as central Europe’s “Mitropa” Cup and Britain’s Home Championship. Generations of European fans have learnt the continent’s geography through club names, from Braga to Dnepropetrovsk.

Today, knowledge exchange in European football is a model for all other sectors. The best teams play each other constantly. After Chelsea beat Real Madrid, the Madrileños go home and work out what Chelsea did better, and so the sport evolves. Spain updated the Dutch passing game, and then the Germans and English learnt from Spain.

English academies now produce footballers such as Mason Mount and Phil Foden, who play like continentals. In football, English exceptionalism died in about 1993, killed by the failings of the indigenous long-ball game with its warrior ethos. That’s one difference between football and political ideologies: in football, success and failure are usually clear. You can blame the referee for one bad scoreboard, but after years of them, you have to start learning from other people.

Weaker versions of football’s knowledge exchange operate in other sectors. Germany learnt from foreign school systems after its “Pisa shock” of 2001, when its schools underperformed in the OECD’s rankings. Northern Europeans learnt about food from the French and Italians.

But football shows how much better this could be done. Here, knowledge is spread around the continent by multilingual émigré coaches such as Jürgen Klopp and Pep Guardiola, moving around an almost perfectly functioning single market. These men are revered in their adopted countries and have become advertisements for their home countries. Over the past year, Britons performed four times more Google searches for Klopp than for Germany’s chancellor, Angela Merkel; Guardiola got 39 times more searches than Spain’s prime minister, Pedro Sánchez.

Meanwhile, Europe’s social democracy pays off in football. You can’t pick future champions aged two based on body type. The only way to create talent is to get millions of kids of all backgrounds playing, on decent fields, with qualified coaches. The world’s most egalitarian continent does this best. Nowadays it even gives girls a chance.

And so the EU, with 6 per cent of the planet’s population, has become football’s lone superpower. The only non-EU country to finish in the top three of the World Cup since 2006 is Lionel Messi’s Argentina. Four different EU member states have won four straight World Cups. The German coach Franz Beckenbauer’s boast in 1990 that a united Germany would become unbeatable proved false. Instead, knowledge spread from core Europe to the historically disadvantaged south: Spain (twice), Greece and Portugal have won the last four European championships.

The continent’s deepest historic divide persists: eastern Europe lags in football as it always has economically. But Croatia’s run to the World Cup final in 2018 suggests that an ever more connected continent will spread knowledge eastwards too.

European football shows how the local, national and continental levels can all thrive at once. Manchester City’s wealth didn’t stop neighbours Blackpool and Morecambe being promoted from lower divisions in playoff finals last week. Nearby Macclesfield was reborn mere weeks after becoming the only English club to fold during the sport’s worst economic crisis since the second world war.

And football shows that a united Europe can coexist with nationalism. Europe since 1945 has mostly guided conflicts between nations into peaceful arenas — above all, football stadiums and Brussels conference rooms. The only significant outbreak of violence at a European Championship since 2000 was perpetrated by Russians (outsiders at the continental party) against English fans in Marseille in 2016. Otherwise, supporters now mingle happily in bars and stands.

After France v West Germany in 1982, TV commentator Georges de Caunes could still say that for Frenchmen of his generation, the kick with which German keeper Toni Schumacher felled France’s Patrick Battiston evoked memories of war. When France next plays Germany, in Munich on June 15, it will be a gathering of friends. Modern European nationalism is a cheery beast.

In fact, speaking strictly as a football fan, I almost wish that Euro 2020 had some of the extra-sporting hostility that international matches had in my childhood. But speaking as a person, I’m glad Europe has helped lay those ghosts.

Indian cricket teams touch base in Southampton - Times of India

Serie A matches among fixtures cancelled after coronavirus outbreak in Italy

Aditi Ashok, a golfer from India, finishes fourth in the women’s individual stroke play event at the Tokyo Olympics.