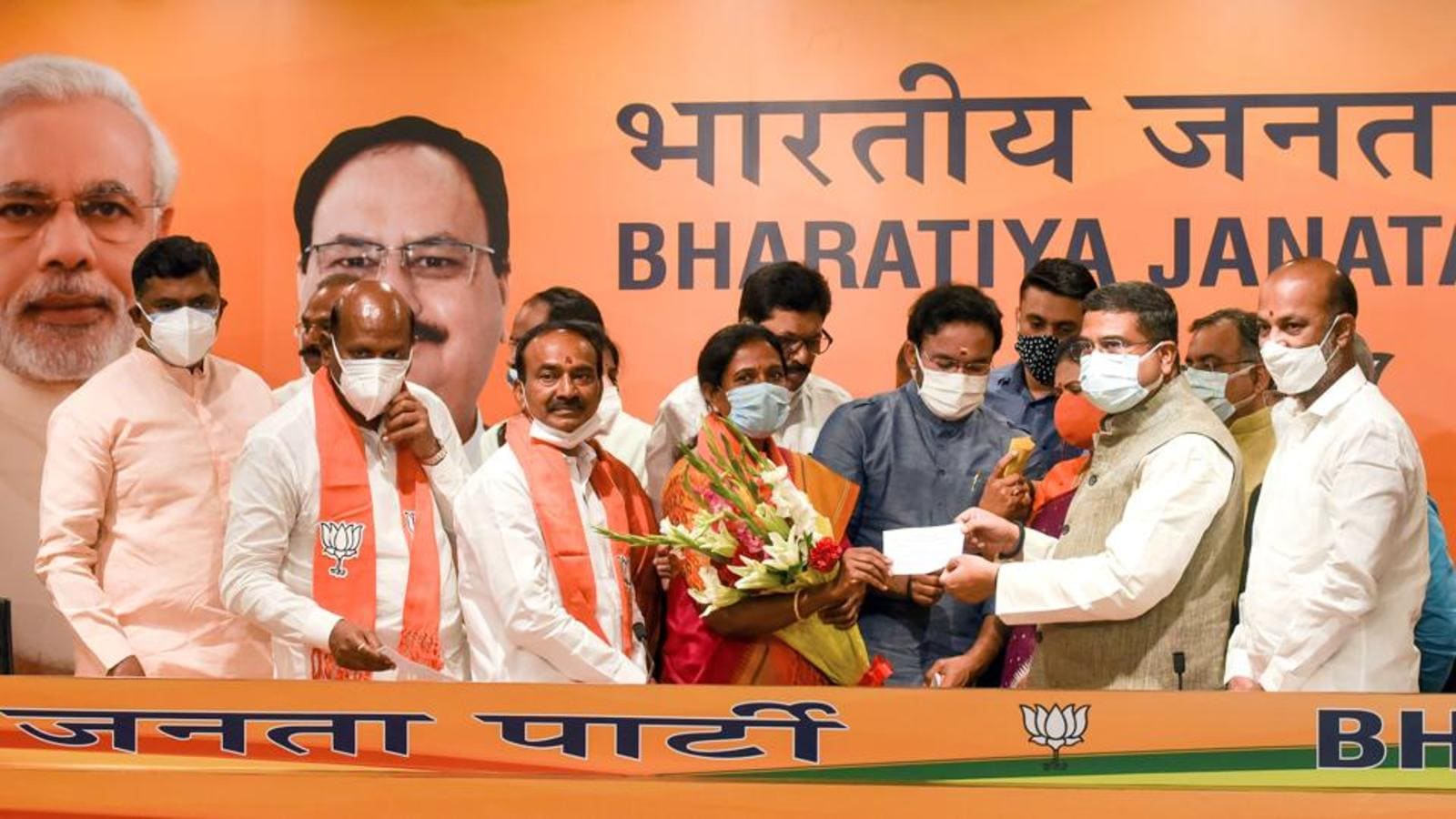 Former Telangana health minister Eatala Rajender, who was sacked from the state cabinet by chief minister K Chandrasekhar Rao on May 1 following allegations of land grabbing, joined the Bharatiya Janata Party on Monday.

Welcoming the former minister into the BJP, Union minister of steel Dharmendra Pradhan said Rajender’s entry would further strengthen the party in Telangana. “After Karnataka, Telangana will soon become a stronghold of the BJP in the South,” Pradhan said.

Rajender was formally given the primary membership of the BJP by Pradhan in New Delhi. BJP in-charge of Telangana affairs Tarun Chugh, Union minister of state for home G Kishan Reddy and other party leaders from Telangana were present on the occasion.

Rajender, a prominent OBC leader representing Huzurabad assembly constituency in northern Telangana, resigned from the TRS on June 4 and from the assembly membership on Saturday. His resignation from the assembly was accepted and the vacancy for the Huzurabad seat was notified immediately.

Expressing thanks to the BJP leadership, Rajender said he would make all-out efforts to expand the footprints of the BJP across Telangana and also in the rest of South India. In the coming days, there would be an exodus of more leaders from the TRS into the BJP, he said.

Originally from the Leftist background, Rajender was an active leader of the Progressive Democratic Students’ Union (PDSU), a student wing of the CPI (Marxist-Leninist) New Democracy, a splinter group of the Naxalites, in the early ‘80s.

In 2003, he joined the TRS founded by K Chandrasekhar Rao and took an active role in the separate Telangana movement. He became the legislator for the first time in 2004 from Kamalapur assembly constituency in Karimnagar district and represented it twice before the constituency was changed into Huzurabad. He continued to represent the same till the 2018 elections.

When KCR was a parliament member, Rajender was made the floor leader of the TRS in the state assembly. He was the first finance minister of the Telangana state when it was formed in 2014. In the second term, he was given the medical and health portfolio which he held till he was sacked recently.

“My DNA is secular. My agenda now is neither right nor left. My only agenda is to get the Telangana rid of the dictatorial and feudal rule of KCR,” Rajender said after quitting the assembly membership.

Meanwhile, Senior TRS leader and state civil supplies minister Gangula Kamalakar said Rajender’s defection to the BJP would hardly have any impact on the party.

“The TRS is very strong in Huzurabad and it is going to win the by-election hands down. We shall develop the constituency 100 times more than what Rajender had done all these years,” Kamalakar, who is looking after the party affairs in the constituency, said.

It was unfortunate that Rajender chose to criticise KCR, who had given him a political life, the minister added.

Senior journalist and political analyst Sangem Ramakrishna said there might not be an immediate impact of Rajender’s exit on the TRS, which was strongly placed in Telangana.

“However, in the long run, he might be a rallying point for the disgruntled elements in the TRS and also the OBC groups in the state. It would strengthen the BJP in northern Telangana,” he said.

TRS leaders all out to corner Etala Rajendar – Deccan Chronicle