SEOUL — South Korea’s central bank on Thursday upgraded its economic growth forecast for this year to 4%, reflecting a speedy recovery in exports and corporate investment as well as improvements in private consumption and employment.

The new forecast is in line with a target set by President Moon Jae-in earlier this month, and would be the economy’s fastest pace of expansion since the 6.8% jump logged for 2010.

The Bank of Korea’s monetary policy board, however, kept its key rate unchanged the same day, at a record-low 0.5%. The bank said it would maintain an accommodative approach for now due to persistent uncertainty surrounding the COVID-19 pandemic and vaccine rollouts.

“The domestic economy is recovering faster than expected since our economic forecast in February, thanks to strong growth in the global economy,” BOK Gov. Lee Ju-yeol told reporters. “Considering this change, we predict that this year’s economic growth will reach 4%, much higher than the previous forecast.”

In February, the BOK had projected that the South Korean economy would expand 3% in 2021. On Thursday, the central bank also raised its inflation forecast for this year to 1.8%. 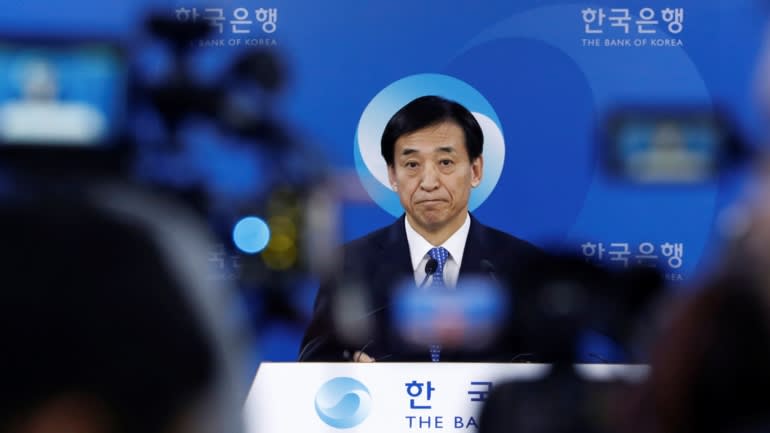 Bank of Korea Gov. Lee Ju-yeol in a file photo: He said the central bank is “preparing thoroughly” to normalize its policy.   © Reuters

The improved outlook comes as the country’s exporters enjoy high demand for semiconductors and cars. South Korea’s exports jumped 41.1% on the year to $51.2 billion in April, marking the highest increase in 10 years.

Corporate investment in facilities also increased 6.6% in the first quarter, from the previous quarter, supporting the strong recovery in gross domestic product. Earlier this month, the country revealed a 510 trillion won ($456 billion) plan to strengthen the chip sector by 2030 and, as Moon put it, become a “semiconductor powerhouse.”

Despite the brighter picture, South Korea’s benchmark Kospi index slipped as much as 0.61% in morning trading, with investors apparently sensing that the days of loose monetary policy might be numbered.

Gov. Lee stressed the BOK would maintain its easy stance for a while longer, but also vowed not to miss the right timing to normalize the benchmark interest rate.

“We will not hurry, but we will not be late either,” he said of the eventual shift in policy. “We are preparing thoroughly for this because it is important to adjust it” in an orderly way.

Economists say that the central bank could start raising rates as early as November.

“We now expect BOK to start the hiking cycle from November, which is earlier than our previous call given hawkish signals” from the May monetary policy board meeting, said Kim Jin-wook, an economist at Citi Research.

“We may see more evident signals on the timing” of rate hikes from the bank’s meetings in August-October, “likely leading to a rate hike in November.”

Kim said there would be several factors pushing the central bank toward tightening. “We expect most adults who seek vaccination would get at least the first short by the early fourth quarter. Economic activities should further improve as the government will ease some social distancing measures to those who receive their first shot.”

IPL will tentatively start in 3rd week of September, 10 double-headers in three-week window - Times of India