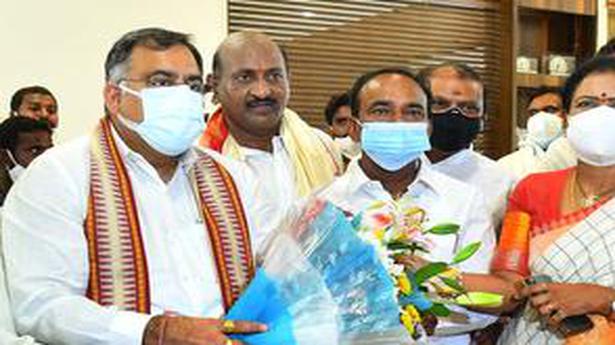 In a two-line statement addressed to the Speaker, he said, “I hereby tender the resignation of my seat in the House with effect from June 12, 2021.”

He paid tributes at the Martyr’s memorial in front of the Assembly before submitting his resignation to the Assembly Secretary.

Mr. Rajender will join the BJP on June 14 in New Delhi in the presence of the party’s national chief J.P. Nadda. On June 11, BJP in-charge for Telangana Tarun Chugh met Mr. Rajender at his residence in Hyderabad and discussed his induction and State-related issues.

Mr. Rajender will fly to New Delhi along with Enugu Ravinder Reddy, former TRS MLA, and Tula Uma, former ZP Chairperson. Former MP from Adilabad Ramesh Rathod and leader of the TSRTC employees Ashwathama Reddy are likely to join him.

Mr. Rajender represented the Huzurabad Assembly constituency ever since it was created after the delimitation. He earlier won from the Kamalapur seat, which was abolished after delimitation. He served as a Minister in the Y.S. Rajashekhar Reddy government in 2004, when the TRS shared power with the Congress government. He was also the TRSLP leader in 2004.

Considered close to Chief Minister K. Chandrashekhar Rao since the Telangana agitation days, he also made a name for himself among the Backward Classes. Rumours of his relationship going sour with the CM are linked to the rumoured elevation of Mr. Rao’s son and Minister K.T. Rama Rao to the top.

Mr. Chandrashekhar Rao apparently got suspicious about certain moves of Mr. Rajender and his remarks on the ownership of the party made in several contexts. The latter has admitted that relations between him and the CM turned sour five years ago.

In fact, when Mr. Rao won the 2018 Assembly election with a thumping majority, he inducted Mahmood Ali into the Cabinet. The Cabinet was expanded only on February 19, 2019, with 10 Ministers, including Mr. Rajender, who was made the Health Minister. Interestingly both Mr. Rama Rao and Mr. Chandrashekhar Rao’s nephew T. Harish Rao were kept out of the Ministry.

Mr. Rajender was dismissed as Minister last month after allegations surfaced of him buying assignment lands illegally and also taking land forcefully from farmers in Achampet and Hakimpet villages on the outskirts of Hyderabad city.

His wife and son run poultry farms registered in the name of Jamuna Hatcheries Private Limited. The enterprise is accused of constructing poultry sheds and structures without obtaining non-agriculture land conversion orders under the Telangana Non-Agriculture Land Conversion Act, 2006.

As a Danish great collapses on field, world of football stops breathing - Times of India